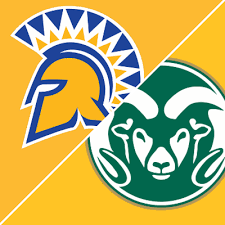 After a week off to reevaluate things, the Colorado State Rams exit non-conference play with more questions than answers. With losses to both South Dakota State and Vanderbilt, it appeared the panic button would be hammered down all season. However, an upset win in Toledo and a heck of an effort against a playoff hopeful in Iowa, the panic has since calmed and Rams fans are slightly optimistic entering conference play.

It’s Homecoming weekend for CSU and their opponent is none other than defending Mountain West Champs; the San Jose State Spartans. Without Nick Starkel last week against New Mexico State, San Jose called upon Sophomore QB, Nick Nash to lead them to a much needed win after getting smoked by Western Michigan a week before. Nash delivered with 193 yards through the air and 3 passing touchdowns.

Who will be the guy under center for the Spartans on Saturday? With the way CSU’s defense is playing lately it might not matter. Thanks to guys like Scott Patchan and Mohamed Kamara, the Rams are punishing opposing Quarterbacks these past few weeks with 12 sacks on the young season.

Can Head Coach Steve Addazio turn things around in his second season or will our hands stay close to the panic button?